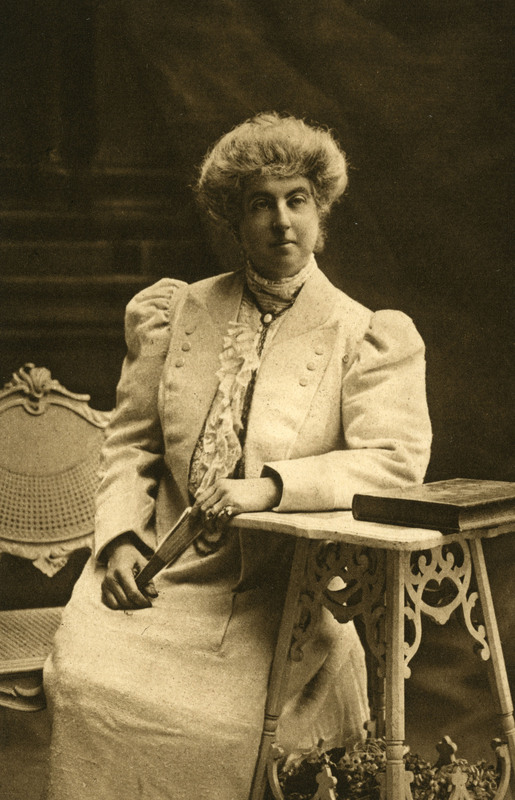 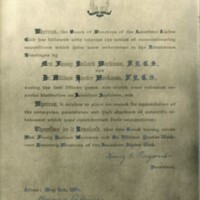 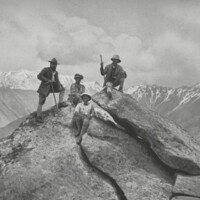 Fanny Bullock Workman, her husband Dr. Hunter Workman, and other expedition members on the summit of Mount Buspar at 14,974 feet on July 8, 1902. 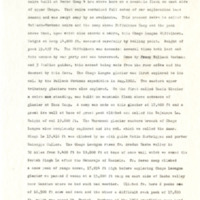 Typed trip notes describing a trip by Dr. and Mrs. Bullock Workman to the upper Chogo. The notes describe the activities of the expedition and mention a cairn built by the party to replace a previous cairn which had been destroyed by an avalanche. The note appears to have been written in 1903. 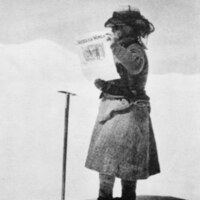 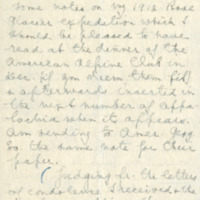 Letter from Fanny Bullock Workman to Harrington Putnam, president of the American Alpine Club at the time. The letter is sent from Srinigar and dated October 21st, no year listed - though it is likely around 1912 or 1913. 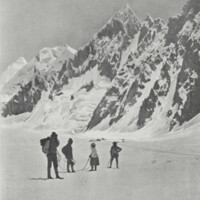 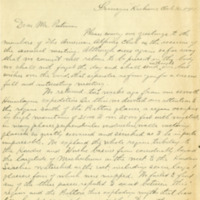 Handwritten letter from William Hunter Workman to Harrington Putnam dated October 30th, 1911 and sent from Srinagar in Kashmir. The letter describes details of a trip the Workmans took the previous summer to the Himalaya region where he and Fanny explored the Siachen and Bilapho Glaciers. 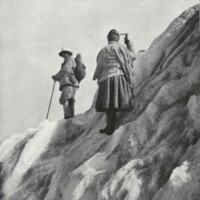 Fanny Bullock Workman on the face of a sérac in August, 1902. Photograph is likely by Mr. Workman. 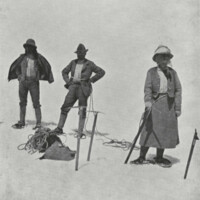 Photograph of Fanny Bullock Workman and Hunter Workman and a third member of the party on snow shoes with ice axes - 1902. 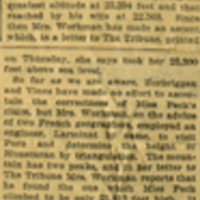 A newspaper clipping which covers the controversy between Annie Peck and Fanny Bullock Workman over Annie's ascent of Huascarán. 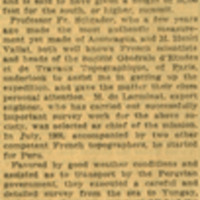 A letter to the editor of the New York Tribune from Fanny Bullock Workman announcing that Annie Peck's estimate of the height of Huascarán was incorrect.

Fanny Bullock Workman (1859-1925) spent eight seasons exploring glaciers and mountains of the Karakoram and Punjab Himalaya between 1898 and 1912. She had made modest, guided ascents in the Alps with husband William Hunter Workman (1847-1935) interspersed with bicycle trips around Europe beginning in 1889. Cycling adventures, over time, took them to Algeria, Morocco, and Egypt, and then to South Asia, where they toured India, Burma, Java, and Ceylon. In 1898, as a break from touring, they trekked out of Srinagar and past Leh to the Karakoram La and then traveled across India to Darjeeling to attempt to walk around Kanchenjunga.

The beauty and challenges of the Karakoram enthralled them. They returned with Swiss or Italian guides and porters to explore and climb, among others, the Biafo, Hispar, Chogo Lungma, and Siachen Glaciers. Fanny climbed to 22,410 feet on Pyramid Peak, now called Spantik, in 1903 and in 1906 to the summit of Pinnacle Peak in the Nun Kun, estimated then to be 23,264 feet.

As a couple, Fanny and Hunter shared planning and executing expeditions and co-authored lavishly produced books illustrated with their photographs and wrote journal and magazine articles. They were proud and jealous of their accomplishments and were pleased to be honored by the American Alpine Club and Club Alpine Française. In 1905 Fanny became the second woman (after Isabella Bird Bishop) to lecture at the Royal Geographical Society in London and was pleased when she could add FRGS after her name—Fellow, Royal Geographical Society.

Annie Peck climbed the Mexican volcanoes of Popocatepetl and Orizaba in 1897, when Orizaba (est. 18,160 ft.) was thought to be the highest summit in North America. She claimed the altitude record for women.

Annie focused on searching for “the apex of America,” targeting Huascarán in Peru’s Cordillera Blanca. She succeeded in 1908, on the lower (north) summit. The mountain’s true elevation wasn’t yet known and newspapers published estimates ranging from 23,000 to 26,000 feet. Annie estimated 24,000 feet as likely, and if so she, not Fanny, held the altitude record for women.

On the September 1908 day of Annie’s success, Fanny and Hunter were finishing their season’s exploration of the Biafo and Hispar Glaciers. Fanny learned of Annie’s claim and wasn’t going to lose her record to an estimate. In June 1909, Fanny hired French surveyors to triangulate Huascarán. Their report arrived in November: Huascarán’s North Peak, the one Annie and her guides climbed, was 21,812 feet and South Peak 22,187 feet. Fanny dispersed the results far and wide in journals, magazines, and newspapers. She devoted a chapter in The Call of the Snowy Hispar (1910) to repeat survey findings and to take Annie to task.

Annie reiterated in 1910 that 23,000 or 24,000 feet were estimates only and that she couldn’t be responsible if they were taken as exact figures. Fanny’s 1906 record on Pinnacle Peak stood until 1934, when Swiss Hettie Dyhrenfurth with husband Günter Dyhrenfurth and party reached the western summit of Sia Kangri (formerly Queen Mary Peak, named by the Workmans) estimated to be 24,000 feet.

--Written by Sallie Greenwood, mountaineering historian and bibliophile. She is working on Women in High Places: The Pioneers, a history of women climbers.