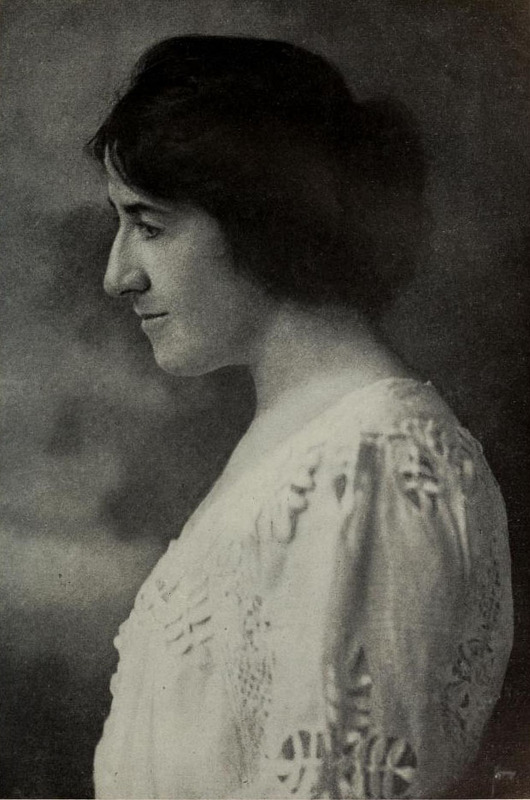 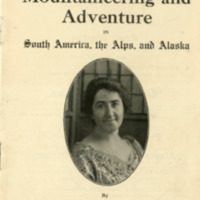 A pamphlet advertising lectures on mountaineering and adventure by Dora Keen. 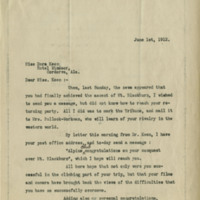 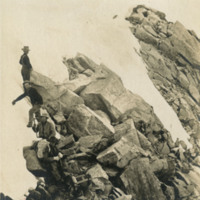 Photograph of four men on a rocky slope with gear. Date is unknown, though likely about 1912. 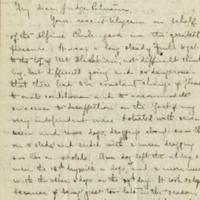 Letter from Dora Keen to Harrington Putnam, president of the American Alpine Club. The letter is dated June 8th, 1912 and is sent from McCarthy, Alaska. The letter describes her experiences climbing Mount Blackburn. 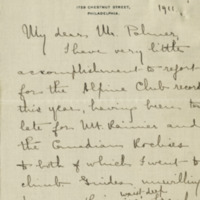 Letter dated October 18, 1911, from Dora Keen to Howard Palmer, secretary of the American Alpine Club. The letter describes Keen’s doings in Alaska, including her first unsuccessful climb of Mount Blackburn. She also discusses a colleague who climbed the Matterhorn that year and recommends her to the American Alpine Club for membership. 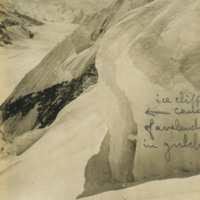 Caption, handwritten in pencil on the front of the photo reads “Ice cliff - cause of avalanche in gulch.” Date is unknown though likely about 1912. 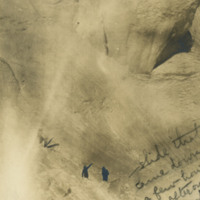 Photograph of two climbers on a snowy slope after a slide. The caption, written in pencil on the front of the photograph reads: “Slide that come down a few hours after our ascent.” Date unknown, though it is likely 1912.

A later letter to Harrington Putnam, dated September 11, 1912, from Dora Keen regarding the Mount Blackburn Expedition.

Dora Keen (1871-1963) organized the first ascent of Mount Blackburn in Alaska, in 1912 and was the first woman to cross the Skolai Pass. She was the only woman on the first expedition to explore the Harvard Glacier and to reach its source. She was a member of the American Alpine Club, a fellow of the Royal Geographical Society, and was the first known woman to climb mountains in Alaska. She also climbed in the Selkirks of Canada, in Norway and in the Alps, including Mont Blanc, the Matterhorn and many more.

Keen later married George Handy, whom she met during her ascent of Mount Blackburn. She gave lectures about the adventures she had all over the world and wrote magazine articles about her travels. She continued adventuring throughout her life and died in Hong Kong in 1963.