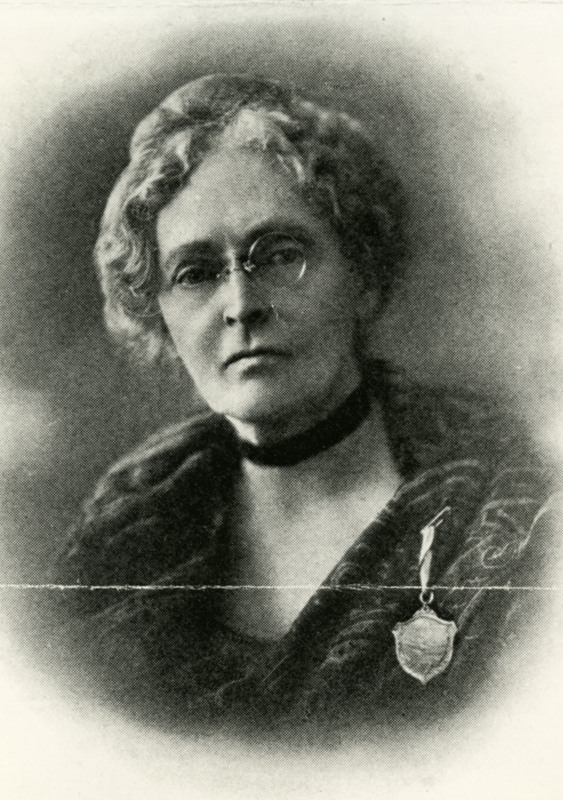 Formal photograph of Annie Peck wearing the medal given to her by the Peruvian government for her ascent of Huascaran's north peak, ca. 1920s. 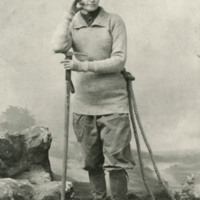 Promotion shot of Annie Peck after her 1895 ascent of the Matterhorn. 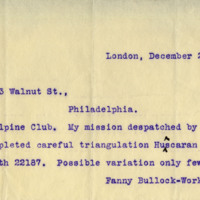 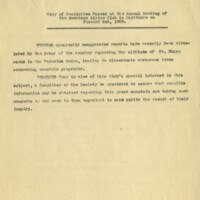 A copy of the American Alpine Club's resolution to discover the true elevation of Mt. Huascaran in light of Fanny Bullock Workman's challenge to Annie Peck's record. 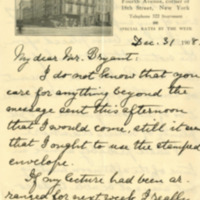 A letter from Annie Peck to Henry G. Bryant, Secretary of the American Alpine Club regarding the presentation of a lecture by Miss Peck on her adventures in mountaineering. 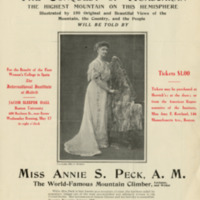 A pamphlet advertising lectures by Annie Peck on her ascent of Mt. Huascaran. 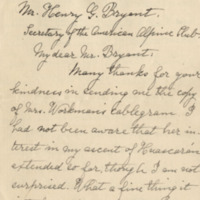 Letter from Annie Peck to Henry G. Bryant regarding the telegram from Fanny Bullock Workman to the American Alpine Club, in which Mrs. Bullock Workman discusses her plans to measure the altitude of Mt. Huascaran. 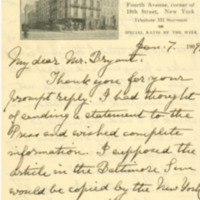 A letter from Annie Peck to Henry G. Bryant requesting information regarding the Resolution passed by the American Alpine Club at their 1909 Annual Meeting. 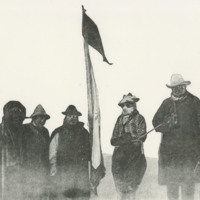 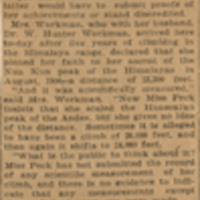 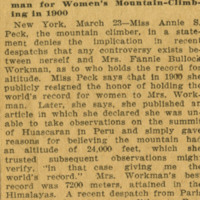 Newspaper clipping stating that Annie Peck claims no record and resigns the honor of holding the world record for highest peak climbed by a woman to Fanny Bullock Workman.

"Although one is not inclined to be timid or nervous, it is nevertheless a trifle depressing to receive letters full of expostulation and entreaty: 'If you are determined to commit suicide, why not come home and do so in a quiet lady-like manner?'"
--Annie Smith Peck (July 1896)

Annie Smith Peck (1850-1935), born in Providence, Rhode Island, pursued an academic career after earning degrees at the University of Michigan and doing post-graduate work at the American School for Classical Studies in Athens, Greece. As a sideline to teaching, she gave popular lectures on Greek and Roman archaeology. Eventually she realized lectures might be an alternative to teaching.

She collected photographs and experiences while touring in Europe, including of her 1895 climb of the Matterhorn. In 1897, sponsored by Nellie Bly’s old newspaper, the New York World, Annie climbed the Mexican volcanoes of Popocatepetl, Orizaba, and Toluca. She claimed, with her ascent of Orizaba (est. 18,160 feet), to have climbed higher than any woman on the continent.

Because her mountaineering talks were so well received, she decided to “search for the apex of America.” Although Aconcagua, variously estimated as 22,805 feet, or 23,080 feet, was thought to be the Western Hemisphere’s highest point and had been climbed (Mattias Zurbriggen,1896), there just might be something higher: Sorata in Bolivia? Huascarán and Coropuna in Peru?

She concentrated her search first in Bolivia and then Peru, eventually succeeding on Huascarán’s north summit in 1908. While Annie focused on climbs in South America, her rival for altitude records—Fanny Bullock Workman—had Annie in her sights (click here to be taken to Fanny Bullock Workman's page).

Annie weathered the controversy over Huascarán and continued her travels in Europe and through much of South America. She became knowledgeable about South American trade and economics and urged U.S. businessmen to invest there. Her last tour—over seven months and 20,000 miles by air—was in 1929 and 1930.

--Written by Sallie Greenwood, mountaineering historian and bibliophile. She is working on Women in High Places: The Pioneers, a history of women climbers.