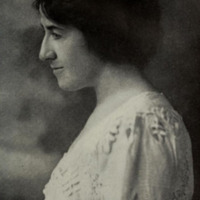 Our climbing history is long, rich, multi-national, and populated by accomplished mountaineers and rock climbers, writers and editors, photographers and filmmakers. They hiked up their skirts, buttoned up their knickerbockers, tied down their hats, laced up their boots and set off.

Mont Blanc’s first ascent by a woman was 1808 and the Matterhorn, 1871. Women accompanied husbands, brothers, and fathers on Alpine climbs regularly and their ascents appeared in climbing journals of the era.

In 1909 Elizabeth Le Blond observed, “mountaineering for women is no new sport, no mere temporary fashion that they will soon tire of.” She had begun climbing at Chamonix in 1881, as a 21-year-old wife and mother and continued winter, spring, summer, fall—60 seasons she figured until her last recorded climb in 1903.

Women pushed standards. Two New Englanders claimed elevation records: Annie Peck on Orizaba (18,160'), in 1897, then thought to be 18,205' and a possible contender for highest mountain in North America. Fanny Bullock Workman obliterated Annie’s record when she reached summits of three peaks in the Karakoram in 1899, the highest being Koser Gunge (20,997'). By the late teens and 1920s women—like men—used guides less frequently.

American Miriam O’Brien Underhill and Nea Barnard Morin among others decided to go a step farther: to lead rock climbs “alone,” that is without men.

Women’s accomplishments to the 1950s may not be familiar, but consider: Loulou Boulaz was working on Alpine north faces in the 1930s; Dorly Marmillod had numerous ascents in the Andes from 1938 to 1954. Jan Conn and Jane Showacre led on Devils Tower. Mary Vaux Walcott pioneered in the Canadian Rockies, Phyl Munday in the Coast Ranges of Canada, Ruth Dyar Mendenhall in the Sierra, and Bonnie Prudden in the Shawangunks. Adriana de Link was the first woman to climb Aconcagua (1940), Barbra Washburn climbed McKinley (both summits) in 1947, and Claude Kogan made a first ascent of a 7,000-meter peak, climbed to 24,300 feet on Cho Oyu in 1954.

“Mountaineering for women is no new sport, no mere temporary fashion that they will soon tire of” bears repeating. Thank you, grandmothers.